Please find information related to each program below. 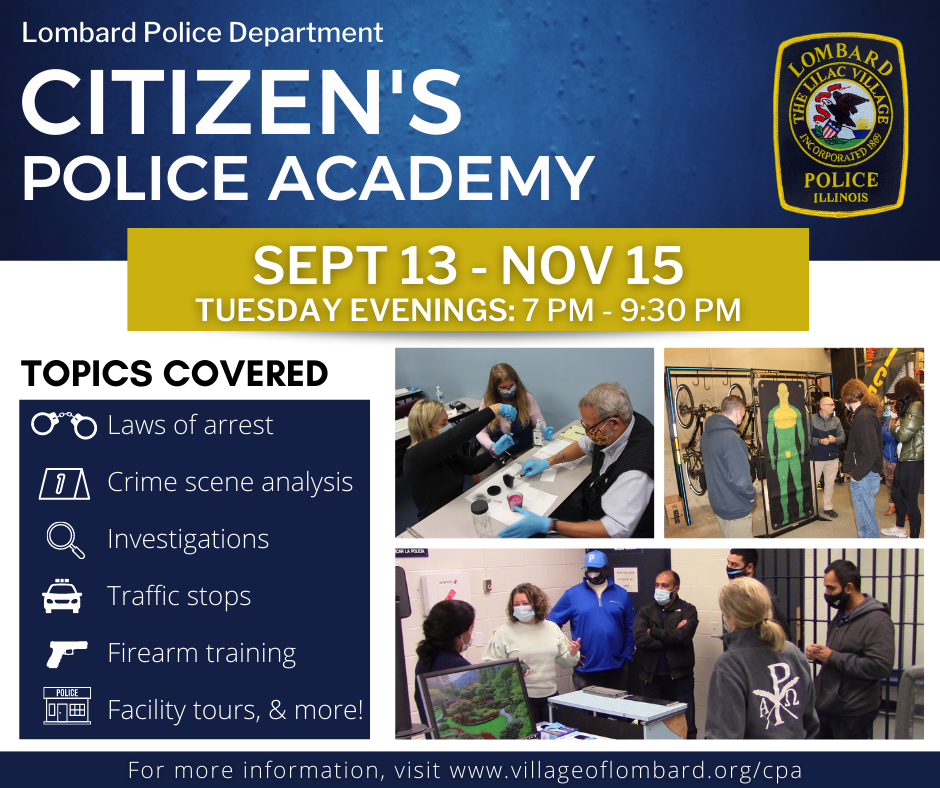 The Lombard Police Department invites citizens living or working in Lombard to participate in its 32nd Annual Citizen’s Police Academy, beginning September 13, 2022. The academy provides an understanding of how the police department operates, modern police procedures, and an inside look at the challenges officers face when serving the community.

The Citizen’s Police Academy is a free, 10-week program held on Tuesday evenings from 7 to 9:30 p.m. at Lombard Village Hall, 255 E. Wilson Ave, and nearby locations. The program will begin on September 13 and run through November 15, 2022. The academy will consist of classroom instruction, interactive discussions, and hands-on practical exercises focusing on various aspects of police work, including investigations, forensics, traffic stops, firearm training, specialty teams, critical incidents, and more.

Class size is limited and citizens may contact Jennifer Wetzel at (630) 873-4462 or email with any questions.

About the Lombard Citizens Police Academy

Since 1997, thirty-one (31) Lombard Police Department Citizens Police Academy sessions have been taught with 536 graduates. The purpose of the Citizens Police Academy is to inform members of our community on the various aspects of the police department and to give them a better understanding of how the police department works. The course curriculum contains a condensed version of basic police training with practical exercises.

Those participating in the academy attended classes and lectures taught by members of the department. The extensive curriculum included lectures on community-oriented policing, crime prevention, laws of arrest, search and seizure, domestic violence and investigations to name a few. Those attending also participated in firearms training, traffic enforcement, police defensive tactics and police ride-along. Classes for the academy are held one day a week for ten weeks, concluding with a graduation ceremony.

"Citizens Police Academies" have been used nationwide by numerous police departments. They report outstanding results in gaining citizen support. As a result, graduates of the academy act as representatives for gaining community support for their police departments and enhance the community policing efforts to reduce crime and fear of crime. 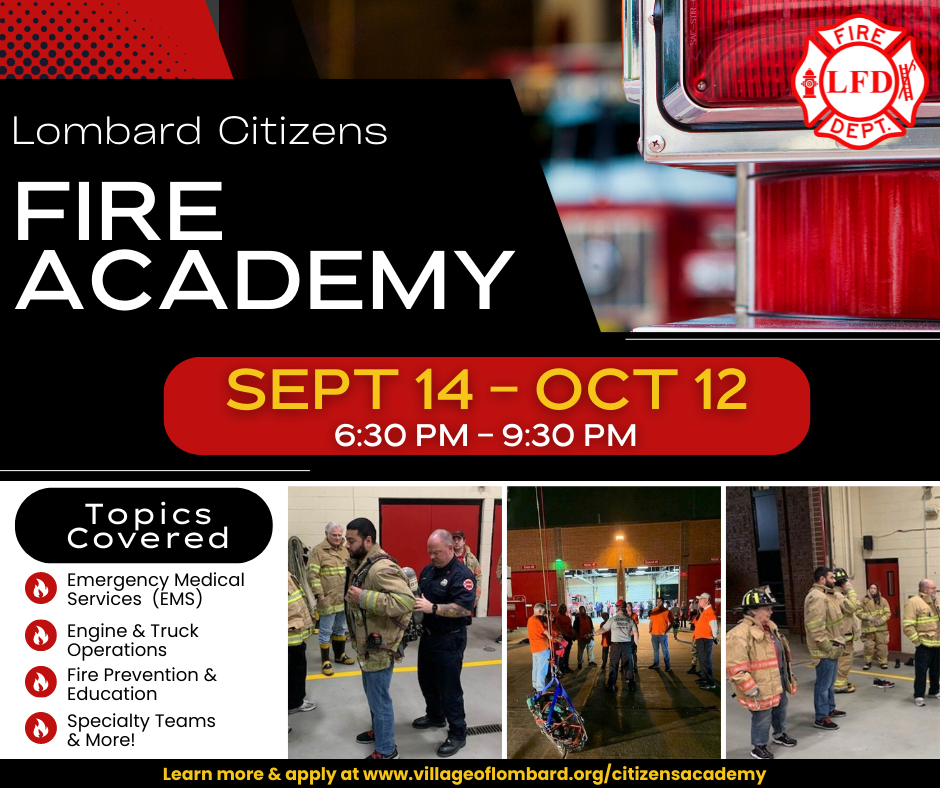 The academy provides participants a unique opportunity to learn about the work and training our Lombard Firefighters perform on a daily basis.

Individuals must be at least 18 years old and live or work in Lombard to participate.

Class size will be limited to 10 participants, so those interested are encouraged to apply using the Application Form below or to stop by Village Hall to pick up a copy. Applications are due by August 19, 2022.

Sessions consist of classroom instruction, interactive discussions, and hands-on practical exercises focusing on various aspects of being a firefighter, including wearing personal protective equipment, extinguishing a fire, climbing a ladder, vehicle extrication, and much more. After completing the program, participants will have a better understanding of how the Lombard Fire Department responds to fire and medical emergencies. 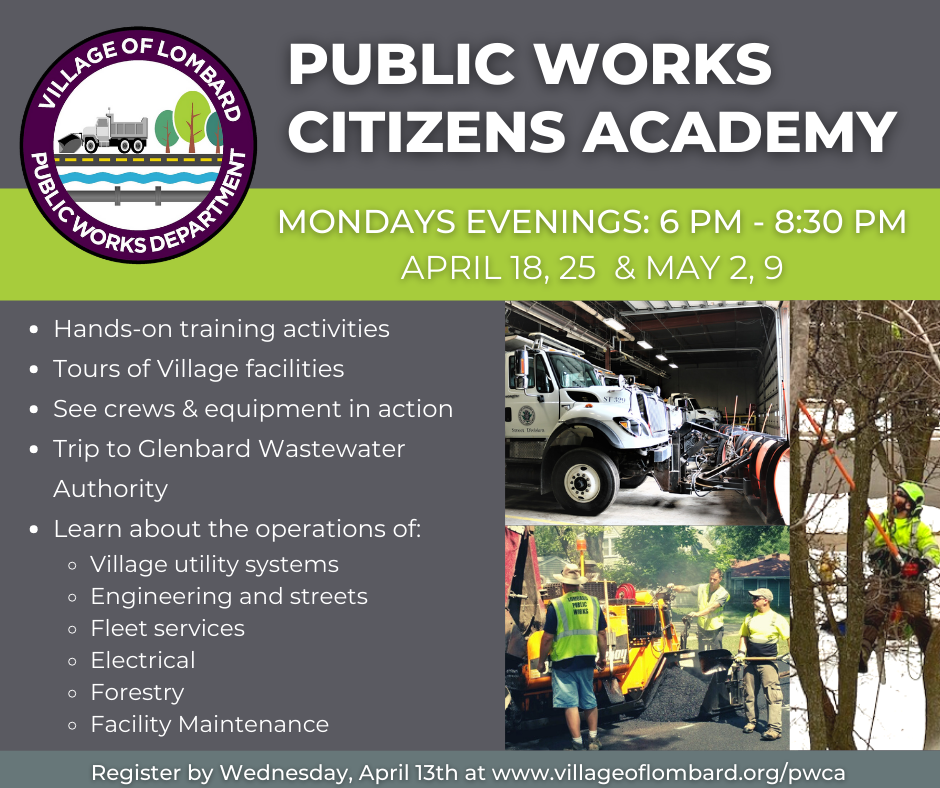 Have you ever wondered how Lombard's water is treated? Or how our streets are maintained? If the answer is yes, then Lombard's Public Works Citizens Academy is for you!

The Academy, which is geared towards adults (you must be 18 or older to participate), will be held over consecutive weeks throughout April and May, with sessions conducted on Monday evenings, 6:00 pm - 8:30 pm. The program includes interactive hands-on activities, tours of Village facilities and presentations by Public Works staff.

Applications are not currently being accepted. The group size is limited to 20 participants. Applications will be accepted in the order they are received. Questions can be directed to the Public Works Department at 630-620-5740 or publicworks@villageoflombard.org.

The Village follows State and CDC guidelines relative to COVID. At this time, masks are optional for participants. Dates and activities could also change or be modified, dependent upon future State/CDC recommendations.

The Village of Lombard is proud to welcome home Lombard-resident Veterans who have completed their time serving our country. Depending on the requestor’s preference, the Village will employ the help of Local VFW Lilac Post 5815, Lombard Police, Lombard Fire, Village Staff and Elected Officials to properly welcome Veterans home to Lombard. If you know of a Veteran of the American Military returning home from service, please fill out the following form so the Village can properly welcome home its Veterans.